The opening ceremony went very smoothly, with the TV crews seemingly more interested in the celebrities in the front row that in what was going on on the stage as you can see from the picture. We were very honoured to have some very important dignitaries from the IOC present among others and it certainly caused a lot of excitement ! The Chinese Contract Bridge Association then put on a buffet for all the participants and it was scrummy :-)
The amazing Patrick Choy managed to get a Senior Team here from Hong Kong at about 24 hours notice to replace the Pakistan Seniors who withdrew at the last minute so all the berths were filled! Play got underway on time at 11.00 this morning and the results are coming in thick and fast - all the links to them are on the website for you.
Behind the scenes the computers are behaving, the first bulletin was printed and delivered to the convention centre on time and is, of course, on internet. All the papers are photocopied for the start of the WBF Meetings tomorrow and the Laws Drafting Committee has started its deliberations to finalise the new Laws ready for publication next year. There are the inevitable glitches, but at least they are (or seem to be) minor and (mostly) quite easily solved ... like the sudden realisations that no one had any appeals forms !! And to everyone's intense relief the coffee machines have arrived !
Our office goes from lovely and peaceful while play is on, to a hub of activity between sessions, with the buzz of chatter in various languages and the occasional explosion from an over-excited player being heard from the corridor outside. The first expedition to the local shops has been undertaken ... to get some extra technical stuff that is required, so not too exciting but I am sure that there will be some far more interesting forays soon once we are more settled!
Posted by anna at 09:42 No comments:

Well, all the players seem to have arrived, and the excitement is building. The captains' meeting has been held, the tables are ready, the scoring system is installed, the VuGraph cameras are ready to roll and I will shortly be going to get changed for the opening ceremony and then the championships will officially be rolling !

It seemed last night as though we were starting to celebrate - I went out for dinner with friends, to a riverside restaurant and suddenly the sky lit up with a fabulous firework display ... it seems there is a national holiday approaching, so it wasn't really to welcome us, but it felt like it. The Chinese are famous for their fireworks of course, and these were no exception. I wasn't really prepared, but managed to get this snapshot to remember it by. The dinner was great as well (Spanish Tapas !) and we had a lovely evening.
The first bulletin should be on the WBF website tomorrow all ready for you to download and read over breakfast - I have put a page of links to sites with information about the championships (results, bulletins, online vu-graph and so forth) - click here to go to it.
I will try and get some pictures from the Opening for you so ... watch this space !
Posted by anna at 10:10 No comments:

Getting into the swing of things ... 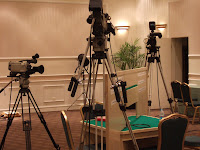 We have spent the day "moving in" to the convention centre - getting our computers set up adding new printer drivers (why is the one you want never there ?!), and getting onto the internal network that has been set up. The hospitality desk is up and running and distributing the bags, players are arriving almost by the minute and all the staff are here. The Vu-Graph studio is in place as you can see, though the background wiring is still being done. We have photocopiers set up (5 big ones …) notices are on the display boards outside the offices to tell people where to find places like the Press Room. There is a small army of helpers building the tables with screens ready for play, moving the computers to their final stations, checking the network connections between the floors.

Tomorrow things get going in earnest, with the Captains' Meeting and then the Opening Ceremony in the evening ... then an early night for everyone ready for the start of play on Sunday morning.

On a personal note, we discovered a great Korean restaurant last night and enjoyed beef with noodles and some fantastic chicken soup with ginseng! It was a fun evening – a massive building, the first four floors filled with shops then the next six (yes six) floors just of restaurants ! I have never seen so many restaurants in one place – something for every taste, and it was really hard to choose between them.

This is a photograph of the Huang Po River taken from my bedroom window at dawn … just to show you a bit of Shanghai !
I will find some more pictures later to give you even more of a flavour of the event ... so watch this space as they say !
Posted by anna at 09:54 No comments:

This morning was the time to check through the venue and make final decisions about which room should be allocated for which purpose - obviously the playing rooms are the main halls and are unchanging, but the offices have to be carefully looked at and decisions made about the layout - both for which room will be which office, and for the layout within the rooms as well. It is surprising to some people how much infrastructure there has to be and the different aspects that have to be taken into account. For example, the duplication room is very noisy, so can't be next to a meeting room. The vu-graph studio needs a lot of space, plenty of air conditioning (it gets very hot under those lights) and must be in a quiet area. The WBF meeting room requires a board room layout, the WBF office (mine, shared with Carol who is WBF Secretary and Christine who is Assistant Treasurer) needs space enough for all the paperwork, somewhere for people to hold quiet one-to-one meetings, and things like that. 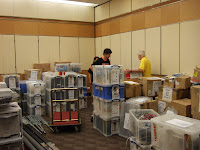 The only room that isn't empty at the moment is this one, where a lot of the equipment is stashed awaiting distribution to the various departments as you can see in this photograph. This is all shipped in from Europe and the boxes you can see contain hundreds of boards for duplication, all the WBF laptops - about 80 of them - printers, leads, hubs and sundry other items. Two container-loads of material in total is shipped out to a Championship ... more if we need to ship tables and screens, but in this instance those are being provided by the local organisation. 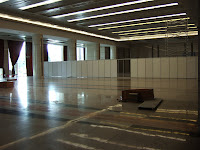 The playing room is having the partition built to separate the Open and Closed Rooms, and once that is done the tables will be built and it will be transformed from an enormous open space to a very busy area - I will post more pictures of that later !
Many of the players are now starting to arrive and have a look round and of course lots of the staff members too - it is great to see them and renew old friendships ... for most of them we only meet once a year at the World Championships, so there is lots of news (and gossip) to catch up on !
Watch this space for more ... hopefully tomorrow !
Posted by anna at 09:42 No comments:

So - I have arrived in Shanghai for the 2007 World Championships - and wow is it an amazing place. We had a warm welcome at the airport from members of the Chinese Contract Bridge Association and were brought to our hotel - I am very fortunate to be staying at the Oriental Riverside Hotel right on the river, next to the famous Shanghai Telecoms Tower, and it is a gorgeous hotel let me tell you ! With, as you can guess because I am posting this, a broadband connection that I am making good use of.

I am going to try and post a blog on a regular basis, to try and give you some idea of what it is like "behind the scenes" at one of these events - so watch this space. I will take some pictures and post them as well, and hope you will find it interesting.

Today, we have had brief look round the Convention centre - which is enormous, and some initial plans are being made by the technical team for the exact layout of the rooms and offices. Tomorrow will be the major day for those decisions and for starting to get to work in readiness for the arrival of the various teams of people who will be working here - the Tournament Directors, the Scoring Team, the Bulletin Editors and of course the Secretariat (well, we are here already!) and later on the Press and Media.

I have seen an army of helpers already packing the hospitality bags - all the participants get one of those - and they will soon start filling the empty rooms with tables and screens, computers and technical equipment, bidding boxes, bidding trays and all the attendant paraphernalia needed for a World Championship

The WBF Executive are also arriving in readiness for their meetings and I have spotted the first of the participating teams coming to get acclimatised and over their jet lag before play starts on Sunday.

It is all quite quiet and empty at the moment, but it will soon start buzzing! And I will try and keep up with the atmosphere and the excitement for you ... hope you will find it interesting!
Posted by anna at 10:04 No comments: