Well, yesterday was nothing if not stressful for our IT Manager Harvey as the hotel lost the internet completely ! The frustrating thing was that it was totally outside his control - indeed it was outside the hotel's control as the Service Provider had managed to "lose" a 10M pipe ! The hotel has a backup solution, which gave us a very very very slow connection that limped us through the day, but poor Harvey was bombarded with questions everywhere he went! It finally got back up and running late last night thank goodness.

The meetings continue this morning, with, I am told a very long discussion on the By Laws and statutes of the WBF. Carol is taking the minutes and I really don't envy her that task. I don't seem to have stopped for breath all morning somehow, but it has been little fiddly things like trying to match up the stapler we have with the right sized staples ! We finally tracked some down, but it means a shopping trip for someone to get more ... funny how sometimes the little things prove so awkward. Then there were the systems to print for the teams playing on VuGraph, more to print for a pair that pre-registered one system and is now playing something completely different. Definately frowned upon that was ...

There was the projector and computer to set up for the video presentations in the Council Meeting room - Bernard Delange who does the vugraph presentation always has a projector and screen we can use, and Mark helped us get it all set up smoothly so that all Carol has to do is double click an icon to get it going when it is to be played. Seems such a simple thing, but it is surprising how long it takes

The nice things that make such a difference though are things like the free coffee machine and, of course, a water fountain that have been provided in our office - we really do appreciate that !

The sun is shining outside, and Mark managed to take a beer and relax by the pool for a while yesterday - not too long, he didn't want to fry ! But at least he got some time in the sun ... I must admit that as far as I am concerned it really is a bit too hot and I prefer to look out from the comfort of an airconditioned room. Sadly the only daylight in the office comes from skylights, and they are frosted glass, but in the mornings we can hear the bird song which is nice. 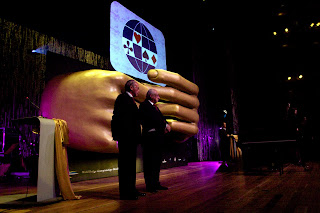 ... now I had better get back to work. This evening we are invited to an official dinner given by Ernesto d'Orsi which should be great fun and we are really looking forward to it.

Oh - I almost forgot. Mark von Linstow took this picture at the Opening Ceremony showing the giant hands that I told you about in an earlier blog, so Ithought you would like to see it ... on stage are Jose Damiani - WBF President, and Ernesto d'Orsi, Zone 3 President and a Past President of the WBF (Jose is on the left)