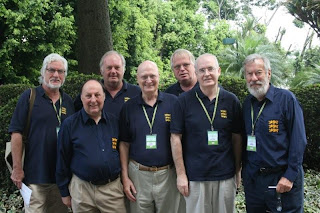 What a marvellous few moments :-)

The English Seniors team has just won the World Seniors Championship AND the Chinese Women's team has just won the Venice Cup ! How exciting is that ? Here are the Senior Team - from the left, David Price, Paul Hackett, Coli Simpson, Peter Baxter (NPC) Gunner Hallberg, John Holland and Ross Harper. What a great bunch of guys (and they were all very huggable tonight !)
The EBU Press Release about the team can be found by clicking here
I have just been drinking Champagne in the Press Room courtesy of Ross Harper (thank you so much Ross) .... it was great to see the English Seniors Win - David Price said that now he knows what it feels like he would like to do it again :-)

As for the Chinese Women's team - that is very special - they have been "up there" so many times and, indeed, lost to the English women by just 1 (yes ONE ) IMP last year in Beijing, but have never one a World Championship, so tonight's win creates four Grand Masters at a stroke and I am so very happy for them.